Arcee was an Autobot field commander. Although never the biggest of toughest Autobots, she was short and nimble and packed a punch. Voiced by: Grey Griffin.

Transformers: Revenge of the Fallen []

Arcee and her sisters were held in reserve as N.E.S.T. entered Shanghai to deal with Demolishor, only being called into action when the presence of a Second Decepticon, Sideways, was detected. Together with the twins, the sisters pursued the sneaky speedster through the street of Shanghai, smashing through buildings and everything else in their way, but ultimately they weren't able to do much damage, so Sideswipe was brought to bat and proceeded to make short work of Sideways.

When The Fallen issued an ultimatum to Earth, the US governments decided that the Autobots would be shipped back to Diego Garcia, but NEST disobeyed the orders, instead shipping Arcee and others to Egypt on the advice of Sam Witwicky, who had the means to ressurect the recently-deceased Optimus Prime. During the climatic battle between NEST and The Fallen's Decepticons, the sisters arrived with Ironhide to help Sam and Mikaela through the warzone. After locating Sam, Elita-One immediately was blasted in the head by a Decepticon, instantly killing her. Arcee was then the next target to get shot by a Decpticon and killed her.

She is later listed as deceased in the Cemetery Wind data base.

Arcee was fighting on Cybertron alongside her fellow Autobots, Ratchet, Ironhide, Wheeljack, Cliffjumper, and Brawn when they were nearly overun. She attempted to contact the capital for some backups. But sadly, it failed. They were saved by the timely arrival of Optimus Prime who ordered them to escape Cybertron via escape pods and rendezvous on Earth.

Transformers: Rise of the Beasts[]

Coming Soon (To Be Added)

To see images go to: Arcee/Gallery 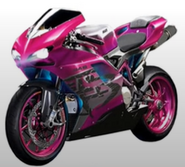